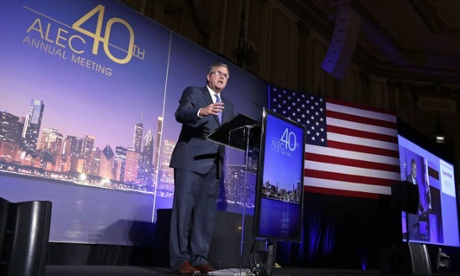 The right-wing group ALEC is preparing to launch a new nationwide network that will seek to replicate its current influence within state legislatures in city councils and municipalities. The American Legislative Exchange Council, founded in 1973, has become one of the most pervasive advocacy operations in the nation. It brings elected officials together with representatives of major corporations, giving those companies a direct channel into legislation in the form of ALEC “model bills.” Now the council is looking to take its blueprint for influence over statewide lawmaking and drill it down to the local level. It has already quietly set up, and is making plans for the public launch of, an offshoot called the American City County Exchange (ACCE) that will target policymakers from “villages, towns, cities and counties.” The Guardian, 3-6-14.