(Daily Clips will not publish Wednesday, July 24, so that the editor can attend the monthly meeting of the King County Democratic Central Committee Tuesday evening. See you there.) 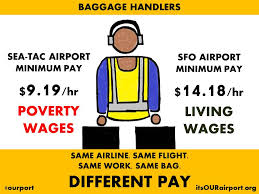 Powerful business interests and unions are staging a showdown in the small town of SeaTac. Tuesday night, the SeaTac City Council is supposed to vote on whether to put a living wage initiative on the November ballot.  Airport workers affiliated with the Service Employees International Union and the Teamsters collected signatures to put the measure on the ballot. It would set a minimum wage of $15 an hour for hospitality and transportation workers, including baggage handlers at the airport. Alaska Air Group and the Washington Restaurant Association tried unsuccessfully last Friday to get a judge to delay the measure from going to the city council. KPLU, 7-22-13. The SeaTac Good Jobs Initiative would bring Sea-Tac Airport in line with workforce standards already in effect at other west coast airports, as documented in the report Below the Radar, issued in March 2013 by Puget Sound Sage. The SeaTac measure would set basic employment standards for workers employed in the transportation, tourism, and hospitality industries in SeaTac, including paid sick leave, full-time work for those who need it, a living wage of at least $15/hour, job security for employees when companies change contractors, and assurances that tips and service charges go to the workers who perform the service. The Stand, 7-22-13.

Liberal Seattle mayoral candidate Peter Steinbrueck was an enabler of the George W. Bush presidency, Democratic State Chairman Dwight Pelz said in an e-mail sent over the weekend to Seattle-area Democratic leaders. With pinpoint timing and accuracy, Pelz has targeted Steinbrueck as a tool in the insurgency that fizzled but cost Al Gore the presidency. Steinbrueck was the first local councilman in America to endorse Nader in 2000.  Steinbrueck spoke to a big Nader rally at Key Arena, mainly paying tribute to his own courage in backing the third party insurgency. “If Nader is a threat to the Democrats, it’s the Democrats’ own fault . . . If you base your vote on the viability of the candidate, then mediocrity prevails,” he said at the time. Seattle P-I, 7-22-13.

Check out locations of every school-zone and red-light traffic camera in Seattle and how many violators each has caught.

The Seattle City Council voted unanimously Monday to spend money raised by school-zone traffic-camera tickets exclusively on road- and pedestrian-safety projects near schools. The separate fund the council established today would require every penny to be spent on operating and maintaining the cameras; safety education; and capital-improvement projects, such as repainted crosswalks, new sidewalks, lights, and more camera installations. Council member Nick Licata has said he wanted a separate fund to increase financial transparency for those skeptical of traffic cameras and to ensure the money is spent the way the city promised. Seattle Times, 7-22-13.

Opponents of the proposed oil terminal at the Port of Vancouver urged commissioners to reject a lease deal with Tesoro Corp. and Savage Companies on Monday night.

In a high-stakes situation and under a national spotlight, Port of Vancouver commissioners are expected to take action this morning on a controversial proposal to build the largest oil terminal in the Pacific Northwest. They may delay a decision because of public safety and other concerns raised by opponents who packed the commissioners’ hearing room Monday night and spilled into the lobby because there weren’t enough seats. However, port managers are recommending Commissioners Jerry Oliver, Brian Wolfe, and Nancy Baker approve what would amount to one of the largest financial arrangements in the history of the 100-year-old port. The companies’ oil-by-rail plan would invest up to $100 million to build a 42-acre operation capable of handling 380,000 barrels of crude per day. The companies say the project will generate an estimated 250 temporary construction jobs and up to 120 full-time positions, most of them hired locally. More than 90 people jammed the port’s administrative office Monday night. Judging by hands raised in opposition and claps in support of speakers, attendees overwhelmingly opposed the crude oil facility. Vancouver Columbian, 7-22-13. 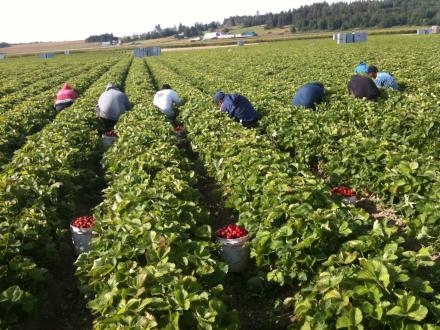 Workers at Sakuma Brothers Farms say they make less than minimum wage on the rates they earn picking berries by the flat.

For the second time in 10 days, workers at Sakuma Brothers Farms have gone on strike. More than 200 berry pickers have walked off the job at the farm near Burlington, saying they want the farm to pay more for each box of blueberries and strawberries they harvest. Rosalinda Guillen, a farmworker advocate with the Bellingham-based group Community to Community, said Monday that the workers were offered a rate that was $5.00 less than the amount offered to another crew. The striking workers said they will not return to work unless they are given the same amount as the other field — $8.50 a box, according to Guillen. The workers claim that the farm supervisor singled them out for lower wages in retaliation for a work stoppage about a week ago. On July 11, these same workers went on strike to demand better wages and work conditions. That strike lasted six days. KUOW, 7-22-13.

Outlook on state credit rating upgraded to ‘stable’ from ‘negative’ 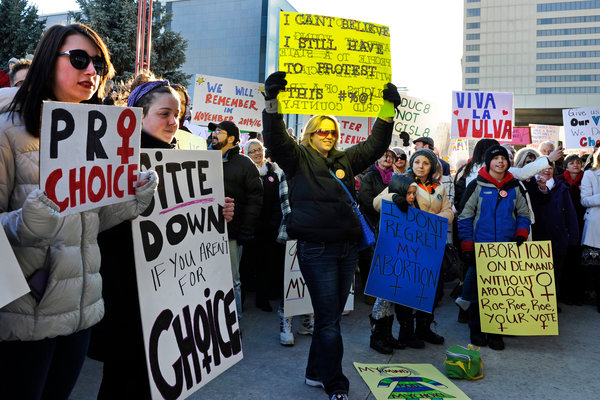 A rally in March 2013 in Fargo ND against strict abortion limits.

A federal judge issued a preliminary injunction against a North Dakota law that bans abortions after just six weeks of pregnancy, siding with reproductive health advocates and stating in no uncertain terms that the law is clearly unconstitutional. “There is no question that North Dakota HB 1456 is in direct contradiction to a litany of United States Supreme Court cases addressing restraints on abortion,” U.S. District Judge Daniel L. Hovland wrote. “HB 1456 is clearly an invalid and unconstitutional law based on the United States Supreme Court precedent in Roe v. Wade from 1973, Planned Parenthood of Southeastern Pennsylvania v. Casey from 1992, and the progeny of cases that have followed. As a practical matter, HB 1456 would ban nearly 90% of all abortions performed at the only clinic in North Dakota which provides such services, in direct contradiction to United States Supreme Court precedent.” Raw Story, 7-22-13. 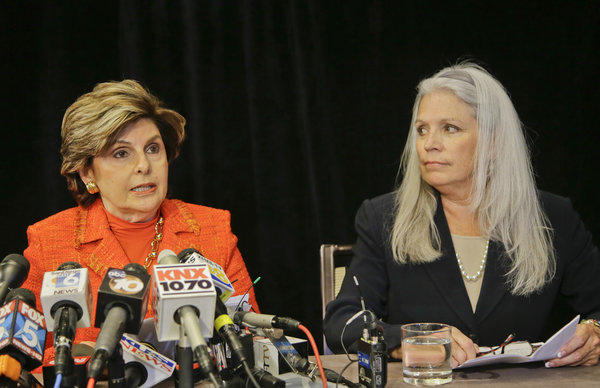 Mayor Bob Filner’s former director of communications filed a lawsuit Monday alleging that he sexually harassed her, put her frequently in a headlock, and said “crude and disgusting” things about sex. The lawsuit, seeking unspecified damages, was filed in San Diego County Superior Court by famed attorney Gloria Allred on behalf of Irene McCormack Jackson, a longtime journalist and employee of the San Diego Port District who became the Democratic mayor’s director of communications because “she believed in him.” Jackson, 57, is the first alleged victim of Filner to go public with accusations. Jackson now works in a different job at City Hall, not on the mayor’s staff. Three ex-supporters two weeks ago accused the mayor of sexual harassment of staffers and constituents but declined to provide names. Los Angeles Times, 7-22-13.

Coming soon to a TV and smartphone near you: a channel dedicated to all things Ron Paul, all the time. The former Texas congressman and GOP presidential candidate is launching an eponymous media channel, poised to debut later this summer. “This project provides us a wonderful opportunity to spread the message of liberty,” Paul says in a promotional video displayed on the new channel’s homepage. The Hill, 7-19-13. A group of UW undergraduate engineers and business students created an electric vehicle modular drive train that can replace drive trains of gas-powered engines in existing models. The electric module can be customized to fit inside any car.