Gov. Jay Inslee’s budget office wouldn’t make its final decision on sending out temporary layoff notices to thousands of state government workers until Monday morning – in  hopes that lawmakers would have a bit more time to forge a late-night or early morning budget agreement. Budget negotiators for the Republican-steered Senate and Democratic-controlled House were trading offers and deliberating behind closed doors in Olympia Sunday afternoon in search of a budget deal that would avert a government shutdown on July 1. But major issues remained on funding K-12 schools, tuition, and state worker health care – among others – which suggested that any budget deal could be many hours, if not days away. Olympian (Tacoma News Tribune), 6-23-13.

With lawmakers set to pour a possible $1 billion more into public schools, Senate Republicans want to make sure most of it doesn’t wind up in the pockets of teachers in the form of pay raises. SB 5946, approved by the Senate, steers most of those new dollars away from salaries and into training existing teachers and hiring new ones to improve the reading skills and academic performance of students. One provision bars school districts from granting pay hikes greater than the rate of inflation for the next two years. Teachers could earn more than inflation but, under the bill, any added compensation would have to be for “targeted professional development” and not salary. Sen. Steve Litzow (R-41), chairman of the Senate education committee, said they want teachers paid for improving their knowledge and abilities in ways that will have an impact in the classroom. There is concern, he said, too much will simply go into salaries. Everett Herald, 6-23-13.

Even without terminals, coal trains will increase

A coal train passes through Everett in May. Proposed export terminals would increase the number of trains between Seattle and Bellingham.

If coal export terminals proposed for the Pacific Northwest are never built, the number of trains rumbling through Washington state filled with coal would still increase. Coal is already shipped from British Columbia, and terminals there are expanding. Possible expansions at the five ports in British Columbia could add 55 million tons per year to their current capacity, according to numbers compiled by SSA Marine. If all of the B.C. expansions come to pass, they would roughly equal the output of Gateway Pacific’s proposed coal port in Whatcom County. Everett Herald, 6-23-13. 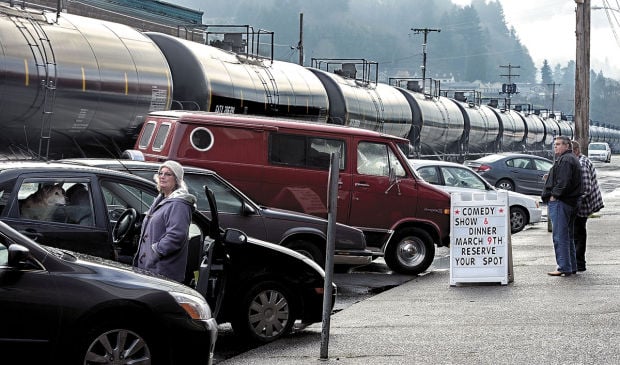 Each week, more and more mile-and-a-half long tanker trains filled with oil travel into the Pacific Northwest. The sweet crude — sucked from deep under North Dakota by hydraulic fracturing, or fracking — brings opportunity for business and jobs in the Lower Columbia region, and stirs fears the river will become a fossil fuel highway. While pipelines are the cheapest way to transport oil, the North Dakota fracking boom has flooded pipeline capacity. Building more pipelines is expensive and involves hefty regulatory burdens, according to the U.S. Energy Administration. So oil companies have turned to the rails. Environmentalists — already spending time and money opposing proposed coal export docks in the Pacific Northwest — say they worry about oil polluting the Columbia River. One major spill could cost millions of dollars to clean up and damage drinking water and salmon habitats, they say. Longview Daily News, 6-23-13.

Ron Burke has made an offer on this property that is in foreclosure in Summit. He says it would make a good site for marijuana production.

When hopeful pot entrepreneurs scramble for one of the coveted new state licenses to grow and sell marijuana, they will need something that might be harder to find than it sounds — an address. Few cities and counties have decided how they will deal with marijuana legalization. Many might still be unsure by mid-October, when the Liquor Control Board will close a monthlong application period for people with dreams of participating in Washington’s historic experiment. Applicants would be left to only guess at where they might be allowed to open shop — setting them up for potential conflicts with local governments around the state. Tacoma News Tribune, 6-22-13.

The Supreme Court punted on affirmative action Monday, issuing a 7-1 decision that sent the case back to the lower courts for a do-over. Eight months after the case was heard, the high court punted, deciding not to issue even a narrow ruling on the merits of the University of Texas’ affirmative action policy for student admissions, let alone a broader decision revisiting the principles of affirmative action as determined last decade. The majority decision was written by Justice Anthony Kennedy. “Because the Fifth Circuit did not hold the University to the demanding burden of strict scrutiny articulated in Grutter and Regents of Univ. of Cal. v. Bakke,” the decision read, “its decision affirming the District Court’s grant of summary judgment to the University was incorrect.” The decision sends the case back to the appeals court, and the court hints that the case might need to go all the way back to the district court for further proceedings. Talking Points Memo, 6-24-13.

More states issuing driver’s licenses to those in U.S. illegally

A year ago, Washington was one of just three states granting driver’s licenses to any person living in the U.S. illegally — holding firm against a nationwide trend. But quietly across the country this year, a curious thing has been happening: A growing number of states are reversing course and seven have now joined Washington and the others. In recent months, all but two states have tweaked their policies to give driver’s licenses to tens of thousands of young people who were brought illegally to the U.S. as children and granted reprieve from deportation and permission to work. On top of that, measures to allow driver’s licenses or driving-privilege cards to millions of undocumented immigrants were introduced in about 18 states this year. While most are pending, seven bills have been enacted into law, to become effective over the next two years or so. Seattle Times, 6-22-13.

When DUI defense lawyer Ted Barr appears in court, he wears a small lapel pin intended to send a message to judges. The pin bears the circular logo of the Citizens for Judicial Excellence (CJE), a political-action committee founded, financed and led by Barr and other local criminal-defense attorneys who specialize in drunken-driving cases. In a CJE newsletter last fall, Barr explained he wears the pin every day to remind judges that the group is tracking their performance and will “do something about it if that judge regularly falls short of the highest standards.” CJE has shown it can back up such talk. Over the past several years, the group has emerged as a muscular — and some say unprecedented — force in typically low-profile elections for municipal- and district-court judges in King and Snohomish counties. Seattle Times, 6-22-13.

As President Obama readies his program to curb greenhouse gases, climate change action advocates are rolling out a new strategy for controlling verbal emissions by climate change deniers — turning allies of Big Oil and Big Coal into national laughingstocks. “The power of ridicule should be deployed here,” said Sen. Brian Schatz (D-HI).  “You have to get to the point where a major candidate for public office is disqualified when he or she denies climate science.” Schatz was speaking to the annual Netroots Nation conference of progressive bloggers in San Jose CA. Still, opposition from the carbon economy and its defenders — e.g. the U.S. Chamber of Commerce — is expected to be intense.  Climate change deniers have borrowed a page from Big Tobacco’s protracted, four-decade battle against the 1964 Surgeon General’s report that smoking causes cancer. “Some of the very same scientists who are denying the human causes of climate change were denying health impacts of tobacco years ago,” said Dr. Michael Mann, who heads the Earth System Climate Center at Penn State University.  Mann notes that R.J. Reynolds spent $70 million to create a cancer-questioning institute. Joel Connelly, Seattle P-I, 6-23-13.