Fast-food walkouts: Local politicians support the gesture, but not the wage 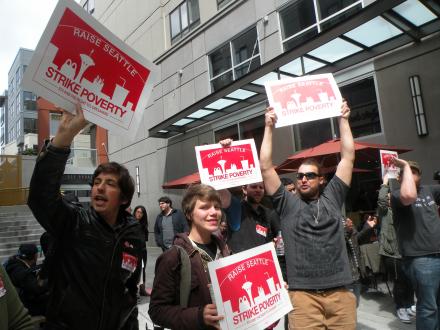 Workers and their supporters rally for better pay and the right to organize,outside Qdoba on Broadway in Seattle.

The only thing that spread faster than Thursday’s city-wide labor walkout at Seattle fast-food joints were the local politicians scrambling to support it. As hundreds of activists marched from fast-food chain to fast-food chain to demand $15 an hour and the right to organize, Mayor Mike McGinn’s sentiment was typical: “I support fast-food workers’ organizing effort because they deserve a living wage that can support their families. #strikepoverty,” he tweeted Thursday afternoon. Also signing on with their support was King County executive Dow Constantine, mayoral candidates state Sen. Ed Murray and Peter Steinbrueck, and Councilmen Richard Conlin and Mike O’Brien. But they all have ducked a question that may seem obvious: Do they support a $15-an-hour minimum wage, a policy that would best ensure that the striking fast-food workers’ demand is met? Across the board, the policymakers hedged on the figure. Seattle Weekly, 6-4-13.

Ballots to be mailed Wednesday for recall of Pacific mayor

Ballots will be mailed Wednesday to about 3,000 Pacific residents to vote on whether to recall Mayor Cy Sun. The recall effort gathered the required 415 signatures last month, hoping to unseat Sun from the post he won in the November 2011 election. No voters’ pamphlets are available for the special election, according to King County Elections. The ballot will contain the charges against Sun—that he used the Police Department as his personal investigation force and that he jeopardized the city’s liability insurance coverage by not filling vacant department head positions—and Sun’s response to the allegations. Tacoma News Tribune, 6-4-13.

King County officials will close the century-old Alvord T. Bridge just south of Kent on Wednesday, June 5, three weeks earlier than planned because too many drivers are ignoring the oversize load restrictions. County Executive Dow Constantine directed the Road Services Division Monday to close the bridge early after county staff observed drivers not following the load restrictions. County officials had previously determined to close the bridge because it’s worn out from the foundation to the structure. The bridge, originally built in 1914, spans the Green River on 78th Avenue South at the southern city limits. Kent Reporter, 6-4-13.

In an impressive display of saving the best for last, Gov. Jay Inslee waited until the end of a press conference Tuesday to acknowledge the two most dramatic possibilities so far in the Olympia budget stalemate: a second special session and a state government shutdown. Inslee said another special session was likely if senators couldn’t agree on a budget by Tuesday, the scheduled end of the current special session. If legislators can’t reach an agreement by the July 1 end of the current budget year, a government shutdown would be possible, he added. Although he accused both sides of intransigence, Inslee saved his harshest words for Republicans, saying that they were effectively trying to force a tax cut even as the state struggles to meet a state Supreme Court mandate to find $4 billion for K-12 education over the next two years. Crosscut, 6-4-13.

A Washington state Senator says she will revive a bill that would make it easier for police to collect DNA samples. That follows a 5-4 US Supreme Court ruling Monday that upheld a Maryland law that allows police to collect DNA samples at the time of arrest from people who are charged with certain violent crimes or sex offenses. State Senator Jeannie Darneille (D-27) said she was “delighted” with Monday’s US Supreme Court ruling. “I see this as a real opportunity for us to move forward with our bill here in Washington.” Currently, Maryland and 27 other states allow police to collect DNA samples at the same time they photograph and fingerprint a suspect. They get it by taking a simple cheek swab. That’s not allowed in Washington. Civil libertarians say they will fight the bill on the grounds that it’s an unwarranted invasion of privacy. “Taking DNA is a highly invasive search that goes way beyond identification,” said Shankar Narayan, Legislative Director of the American Civil Liberties Union of Washington. KUOW, 6-4-13.

Eighty-eight of Kittitas Valley Healthcare Hospital’s 107 nurses have signed a petition demanding the hospital immediately remove its CEO from office. The petition was presented to KVH’s board of commissioners during a May 23 meeting, according to a statement released by the Washington State Nurses Association (WSNA) last week. The WSNA represents KVH nurses who have been embroiled in a labor dispute with the hospital for the past 18 months. The petition signed by nurses seeks the removal of KVH CEO Paul Nurick, who declined to comment about it in detail. Nurick said he was disappointed by the sentiment. The statement said KVH nurses disagree with the hospital’s decision to implement a final offer for a labor contract without their agreement. Nurses received the final offer in January. Ellensburg Daily Record, 6-3-13.

Gov. Chris Christie of New Jersey, in a decision fraught with political implications, said Tuesday he would schedule a special election in October for the Senate seat left vacant by the death of Frank R. Lautenberg (D-NJ). The decision to set the vote for Oct. 16, a Wednesday, was immediately attacked by Democrats, who said the move by Christie, a Republican, amounted to squandering taxpayer money to protect his own political ambitions. His re-election race, and not the Senate race, now will head the ballot in November 2013. Republicans, on the other hand, would have preferred that Christie had set the Senate special election for November 2014, to give a Republican appointee another entire year of incumbency. New York Times, 6-4-13.

A Kansas farmer has sued seed giant Monsanto over last week’s discovery of genetically engineered experimental wheat in an 80-acre field in Oregon, claiming the company’s gross negligence hurt U.S. growers by driving down wheat prices and causing some international markets to suspend certain imports. The federal civil lawsuit, filed Monday by Ernest Barnes, who farms 1,000 acres near Elkhart in southwest Kansas, seeks unspecified damages to be determined at trial. U.S. Department of Agriculture officials said last Wednesday that the modified wheat was the same strain as one designed by Monsanto to be herbicide-resistant that was tested in Oregon and several other states through 2005, but never approved. The USDA has said the Oregon wheat is safe to eat and there is no evidence that modified wheat entered the marketplace. It’s believed to be the first lawsuit stemming from the discovery. Similar lawsuits are in the works, Barnes’ attorney said, and the cases will likely be consolidated for the purposes of discovery, a process where evidence is investigated and shared among parties. Associated Press (Wichita Eagle), 6-4-13. 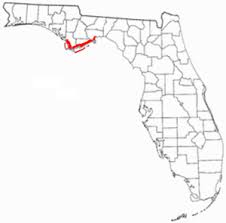 Apalachicola Bay is marked in red on the map of Florida.

If these were ordinary times, Leroy Shiver would be scissoring his heavy tongs along the shallows of Apalachicola Bay and hauling up bushels of oysters for hours on end. Instead, in a task requiring equal doses of patience and hope, Shiver shoveled piles of dried oyster shells off his boat into the bay. A long line of oystermen and oysterwomen in boats alongside him also joined in the shell dump, a government-sanctioned, last-ditch attempt to revive the decimated oyster industry in Apalachicola. The fishery’s collapse, which began last summer and has stretched into this year, is the most blatant sign yet of the bay’s vulnerability in the face of decades of dwindling flow from two rivers originating in Georgia. For 23 years now, Georgia, Alabama and Florida have waged a classic upstream-downstream water war, with Alabama and Florida coming out on the losing end of a long court battle in 2011. New York Times, 6-2-13.

Gov. Jerry Brown is poised for a big victory

Gov. Jerry Brown responds to a question concerning his revised 2013-14 state budget plan during a news conference at the Capitol on May 14.

California is close to making the most sweeping change in how it spends money on schools since Ronald Reagan was governor four decades ago. And Gov. Jerry Brown is on the verge of a monumental personal triumph—a legacy builder, for better or worse. Nobody really knows. It’s an example of landmark legislating with one-party rule. The governor pretty much gets his way while being restrained by the Legislature, led by fellow Democrats. Also credit the Legislature’s ability, since 2011, to pass a budget on a simple majority vote. The backroom dealing would have been daunting if a two-thirds vote were still required. In this case, inner-city school districts with lots of “high need” students stand to win—at the expense of suburban middle-class kids—but not as decidedly as the governor had proposed. It’s happening as part of a new state spending plan that the Legislature must pass by June 15. School funding is the big-ticket item in a budget bazaar called the Joint Conference Committee. Capitol Journal (Los Angeles Times), 6-2-13.