Immigration has transformed the Eastside’s demographics, culture and economy. But what about its politics? Why are its immigrants and other minorities largely absent from elected office? The Eastside’s political leadership includes two notable trailblazers: Hong Kong-born Conrad Lee, a member of Bellevue’s city council since 1994 and its mayor since early last year, and Representative Cyrus Habib (D-48), who last November became the first Iranian American elected to a state legislature, and the highest-ranking in public office nationwide. Crosscut, 3-20-13.

After several hours of public testimony, a divided Kirkland City Council adopted an ordinance to prevent landlords from rejecting potential rental tenants solely based on the fact that they pay part of their rent with a Section 8 Housing Voucher. Council members Penny Sweet, Bob Sternoff, and Toby Nixon voted no, while Mayor Joan McBride, Deputy Mayor Doreen Marchione, and council members Dave Asher and Amy Walen voted yes. Several of the council members on both sides of the issue said they themselves rent out property in the area. McBride said that she proudly supported the ordinance. “When people live here and raise their children here, wonderful things happen. I’m not afraid of this ordinance,” she said. Kirkland Patch, 3-20-13.

The police loophole: How a local detective sold up to 2,000 guns on the black market

Until he went off to prison last year for gun running, Roy Alloway was best known as the man most likely to kick down your door and take your weed. As a Bremerton and WestNet federal task force detective, he was the go-to guy for busting home grows and medical marijuana ops from the Olympics to the Cascades. He was so gung-ho that an outlaw strain of weed was named to mock his exploits – “Alloway 420.” And though he gained additional notoriety when arrested in 2010 for peddling guns without a license, the in-depth story of the policeman’s lawlessness is only now being told. Seattle Weekly, 3-20-13.

Legislators generally wait for the March revenue forecast before rolling out their spending plans. And Wednesday, they got what passes for good news nowadays — no big drop in projected tax collections. In fact, the bottom line improved by a modest $40 million. By comparison, the current two-year state budget is roughly $31 billion. “From my point of view, we have a hard problem to resolve and this doesn’t make it worse,” said House Appropriations Chairman Ross Hunter (D-48). What’s the problem? An overall budget shortfall of as much as $1.3 billion and a state Supreme Court mandate to increase education funding. Seattle Times, 3-20-13.

The Washington State Transportation Commission is proposing a 2.5 percent toll-rate increase for the State Route 520 bridge. The new rate would take effect July 1. This increase is consistent with the project’s state financial plan, which anticipates annual rate increases of 2.5 percent through 2015. Mercer Island Reporter, 3-20-13. But wait! Sen. Pam Roach (R-31) says the Transportation Commission no longer has authority to raise rates, and the Legislature won’t have time. Roach, who was referring to the Tacoma Narows Bridge,  had requested a review from the Attorney General’s office on the effects of Initiative 1185, passed by voters in November. The query was referred to the Office of Financial Management, which ruled March 8 that no transportation toll can be increased except by legislative approval. Kitsap Sun, 3-19-13. Roach said it would be “very difficult, if not impossible” for lawmakers to approve the new toll rates and that empowering the commission to make the decision would be perceived by the people as a “circumventing of their will.” She has backup from the other side of the aisle. Sen. Nathan Schlicher (D-26) said there must be greater accountability before lawmakers would consider restoring toll-setting authority to the commission. He urged the commission to do its part to rein in costs to hold down tolls on the Narrows Bridge. Tacoma News Tribune, 3-19-13.

Drusilla Hieber and Nancy Van Noy played golf on July 23, 2008. Or, in Hieber’s words, they “had the audacity to play golf” on July 23, 2008. It was, after all, a Wednesday – and at the Spokane Country Club, where Hieber and Van Noy are members, Wednesdays were men’s days. The duo’s brazen outing sparked a petition that was eventually signed by more than 90 members of the club. The petition argued that female members – 27 of them, out of some 350 members – were running roughshod over the rights of men. That kind of thing, Hieber’s attorney argues, is why a court must step in and force the Spokane Country Club to “desegregate” its practices and culture. A jury already awarded four female members of the club more than half a million dollars in damages, finding that the club had discriminated against them by denying them full access to events and facilities while charging them the same as the men. Hieber and Van Noy were two plaintiffs, along with Laura Skaer and Tracy Christensen. Now they’re asking for “injunctive relief” – a court-supervised forced march of change. Part of their argument is that the club’s members and board have retaliated and tried to intimidate them, including a lot of crude, aggressive, boorish behavior. Spokane Spokesman-Review, 3-20-13.

Rick Burton of Port Angeles, a papermaker for Nippon Paper Industries USA, walks down the Waterfront Trail from a gathering of fellow pickets after Wednesday’s walkout by the company’s unionized employees.

Some of the approximately 130 Nippon Paper Industries USA employees who walked off the job late Wednesday morning will picket around the clock on a sidewalk near the closed plant in Port Angeles, a top union official said. Greg Pallesen, vice president of the Association of Western Pulp and Paper Workers, said about 130 workers in Local 155 voted unanimously to go on strike Wednesday, two days after Nippon imposed a contract that union members already had rejected. But Nippon and the union also have agreed to attempt to restart their dialogue under the auspices of federal mediation. Peninsula Daily News, 3-21-13.

Neurosurgeon’s speeches have conservatives dreaming of 2016 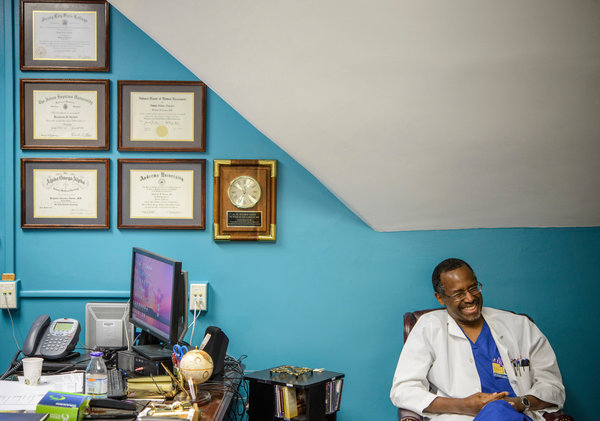 Dr. Benjamin Carson, a well-known neurosurgeon, is drawing notice for his political speeches.

Dr. Benjamin Carson was a political unknown just weeks ago. Then with a single speech delivered as President Obama looked stonily on, he was lofted into the conservative firmament as its newest star: a renowned neurosurgeon who is black and has the credibility to attack the president on health care. In his speech at the National Prayer Breakfast last month, Dr. Carson criticized the health care overhaul and higher taxes on the rich, while warning that “the P.C. police are out in force at all times.” Overnight, he was embraced by conservatives including those at the Wall Street Journal editorial page, which proclaimed, “Ben Carson for President” — a suggestion Dr. Carson helped feed at a high-profile gathering last weekend, the Conservative Political Action Conference. New York Times, 3-21-13.

It was billed as a briefing for members of Washington’s congressional delegation and their staff members about the dismal state of science and math education in American public schools. But it was obvious just minutes into Tuesday’s event at the U.S. Capitol that the lawmakers needed no warning from Microsoft and other technology employers that Washington state and the nation need to revamp the way they educate future engineers and computer programmers. “As a state, we are not nearly doing what we need to do,” said Brad Smith, Microsoft’s general counsel. Seattle Times, 3-19-13. (Multiple readers in the comment thread called the event a Microsoft dog-and-pony lobbying show to get Congressional approval for more H-1B visas).

Will teach 4 a place 2 live 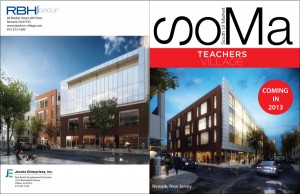 Teacher Village is under construction in Newark NJ, thanks to the support of Goldman Sachs. Teachers will live on site next to three outstanding charter schools.

When education reform and real estate development get together, miracle$ happen… because the fresh new teachers traveled from far away to boost achievement and excellence, they didn’t have anywhere to live. Fortunately, bold visionary leaders who have figured out one way to boost profits  achievement almost always have another great idea waiting in the wings. Stop one on today’s tour of excellence takes us to Philadelphia, where even as we say farewell to 23 old school schools and their teachers, “a vibrant ecosystem of reform” is under construction. That sound you hear is  the construction of a bold new headquarters for Teach for America, housing for hundreds of TFA corps members (complete with their own little ideological echo chamber, no doubt), and office space for a rainbow of edupreneurs. EduShyster, 3-14-13.